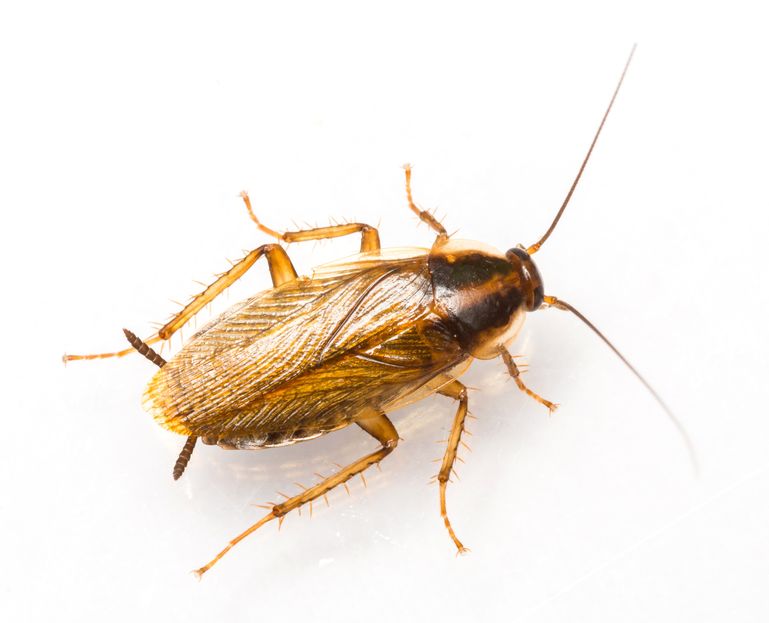 The most common cockroaches that are found in households are the German cockroach.

Before you get the pleasure to see one running across your kitchen counter, the German cockroach will go through three life stages, the egg, nymph, and the adult.

On average a roach’s life span is between 100 and 200 days. The female cockroach has the ability to produce on average 400 eggs at a time. These pests produce very quickly.

The female only needs to mate one time to produce her young. Generally, the female will produce 4 to 6 egg cases during her life span.  Inside the female’s eggs, referred to as the ootheca contain about 35 eggs and are brown in color.

They are 7mm long and 2mm wide. She carries her ootheca on her abdomen until it is time to hatch. Afterwards, she then seeks out a safe place behind your walls for her bundles of joy to grow to maturity! Nymphs are what emerge from the ootheca.

Shortly, these little pests darken in color becoming what we usually recognize as dark brown or black cockroaches. These cockroaches at this stage referred to as nymphs are wingless and are too premature to reproduce. These nymphs can develop within 100 days.

The adult cockroaches are about 15 mm in length and have wings. They rarely fly; they seem to prefer to run. The adult can be easily recognized by their brown or tan coloration with two black horizontal stripes located on the pronotum right behind the head.

Depending on conditions, the average time for development from egg to adult is usually between 54 to 215 days, with an average time of 100 days.

These pests are capable of living outdoors, however they seem to prefer to live indoors where it is warmer and more humid. They are usually found gravitating toward kitchens and bathrooms where food and moisture is available.

One way German cockroaches can enter your home is through hitch hiking a ride in bags, boxes, or card board containers that is brought into the home. These pests have the ability to move between units that share plumbing and pipes throughout multiunit apartment buildings.

German cockroaches are scavengers and live off of mostly anything such as toothpaste, soap, and even the bindings of books. These survivors can live off of the smallest crumbs left behind during cleaning.

Some signs that your home may have a German cockroach infestation are finding small, dark, pepper like droppings often found in drawers and on counter tops.

Fecal staining appears like dark spears and raised often found in the corners of the rooms, along the tops of doors, in small cracks and openings into walls.

Further, another sign of infestation is finding empty egg cases close by where females would be depositing their eggs. In addition, German cockroaches secrete a number of odorous compounds. With an increase in population, comes a mild musty odor.

These pests are known to carry and transmit a number of pathogens, including E coli, Salmonella and Typhus. Studies have shown that in those areas where there is an increase in German cockroaches, children are linked to be directly affected with asthma.

If you find yourself struggling with getting rid of these pests on your own because their populations tend to grow rapidly within a human habitat, your pest control provider is better equipped to handling the job by using a professional treatment.