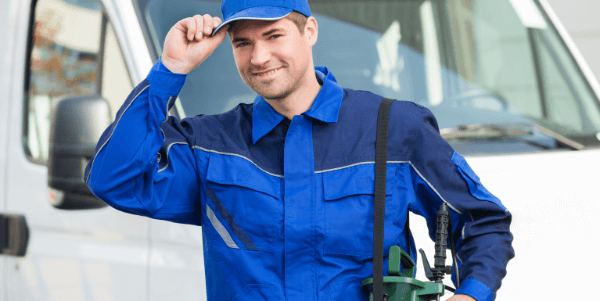 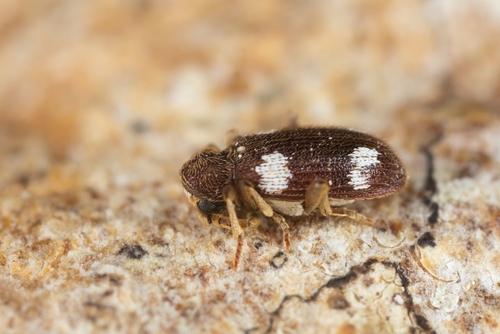 Spider beetles are small beetles belonging to the family Anobiidae. There are three different spider beetles that we refer to.

They are the American spider beetle, the white marked spider beetle, and the smooth spider beetle. These pests look somewhat like small spiders (or large mites) due to their long legs and relatively large, rounded abdomens.

The American spider beetle for starters, measures from 1.5 to 3.5 millimeters in length and has a dark reddish-brown to black, shiny, globular abdomen.

The head, thorax, legs, and antennae are covered with hairs that are a pale yellow to cream color.

Further, the white marked spider beetle adult measures from 2 to 4.3 millimeters long and are light brown in color with patches of white hairs on the wing covers. Oftentimes, the white patches are rubbed off of older beetles.

Males have a thinner and a more extended abdomen than the females. The smooth spider beetle adult is similar in shape and color and often compared to the American spider beetle. However, the head, thorax, legs, and antennae are the same color as the abdomen.

This species, more than the other spider beetles, resembles a large, reddish mite. The larvae of all three species of beetles are found “C” shaped and cream in color with light brown heads. The length depends on the age of the larvae but are capable of reaching 3.5 to 4 millimeters.

These pests prefer damp areas and enjoy feeding on spoiled food. They can be found within walls and attics, in the cracks of wooden floors in granaries, bakeries, and in the nests of birds and rodents. They have been known to be active at temperatures below freezing and will have from one to two generations per year depending on the ambient temperature and relative humidity.

To control an infestation of spider beetles you must first identify and eliminate all infested foodstuff. In many ways, this is similar to the control of all stored-product pests, but is made exceedingly difficult because of the beetles’ ability to feed on so many different items from food found in your pantry to a rodent nest under the floor, or bat droppings in the attic space, or from dead overwintering insects trapped within an exterior wall.

When all else fails, be sure to call a pest control professional who can help you identify and eliminate any pest infestation quickly and safely.